The right to citizenship: Challenges for forest indigenous peoples in Cameroon

On the 70th Anniversary of the International Declaration on Human Rights, the Gbabandi platform launched a Declaration and Report (french only) on access to citizenship for the indigenous forest peoples in Cameroon. Over 50 representatives from indigenous communities, Cameroonian civil society and the Government have come together in Yaoundé for this launch, which is part of a national dialogue on the rights of indigenous forest peoples and access to citizenship.

Documented citizenship – a key element of the human right to a nationality – is not only a right in itself, but a cornerstone to the enjoyment of civil, political, economic, social and cultural rights. In Cameroon for example, one or more key citizenship documents – such as a birth certificate, national identity card, or electoral card – are necessary to be able to enrol children in school, move freely around the country, vote, initiate legal procedures, apply for jobs, and perform many other essential life activities. However, for the indigenous communities of Cameroon’s forests, it has long been known that a significant number lack citizenship documents, and have therefore been disproportionately excluded from the enjoyment of other legal rights.

The lack of direct information on this problem – and in particular the absence of disaggregated data collected or published by the Cameroonian government – has made it difficult to understand the true scope and nature of this problem. This study has sought to address that paucity, through the collection of information from approximately 40 indigenous forest communities – estimated at approximately 24% of the indigenous forest population – using the Indigenous Navigator survey tool. The data collected represents communities’ own assessments of the (collective) status of a variety of human rights issues, and provides a ground-truthed insight into the situation.

Examining some of the causes behind this lack of access, this report presents the results of that data collection in relation to citizenship. Findings from the surveys conducted reveal that:

The reasons suggested for this lack of access to citizenship documents are diverse. Among the most important cited are the distance of indigenous communities from citizenship offices (where births are registered and national identity cards obtained), the costs (direct and indirect) of obtaining these documents, and the complexity of the procedure (particularly for those who were never registered at birth, and must therefore engage judicial procedures to obtain a birth certificate). Low literacy levels and the lack of awareness among indigenous communities of the role and function of citizenship documents are also among the contributing factors.

It is in the interest of all citizens of Cameroon that the indigenous peoples of the forest can take their rightful place as active participants in the future of this country. Moreover, it is a legal obligation of the State to provide access to citizenship documents for all of its citizens. Recognising this, the Government of Cameroon has prioritised Target 16.9 of the Sustainable Development Goals, which aims to provide a legal identity to all, including free birth registrations, by 2030. This report has made a number of recommendations for its realisation in respect to the indigenous forest peoples of Cameroon, and the Gbabandi platform looks forward to collaborating with the government to help make citizenship for all a reality. 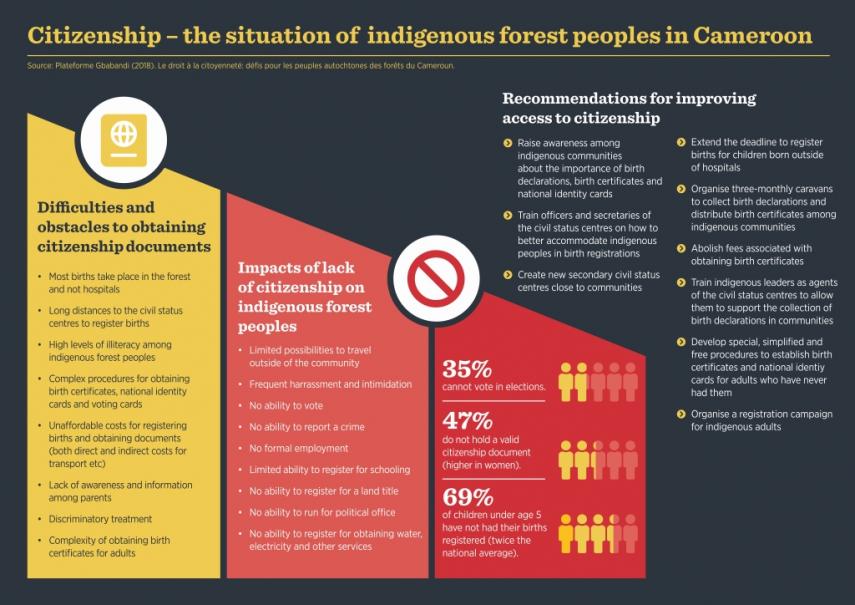 Supported by the European Union

The Indigenous Navigator provides a set of tools for indigenous peoples to systematically monitor the level of recognition and implementation of their rights.